Is It A Dupe? (Picture Heavy)

Hi guys! I'm on my last week of my 4 week long summer program... so I'm almost done and it's getting really hectic right now! So I apologize for the extreme lack of posts... as I try to blog as often as I can, but that usually results in a post a week. That's so shameful of me!

So last night after I got home from my boyfriend's house... I thought that I needed to do something to catch up with my blogger girls! I found a bunch of products which 'looked' alike with one being a drugstore product, and one being more expensive. So are they a dupe? We'll see! 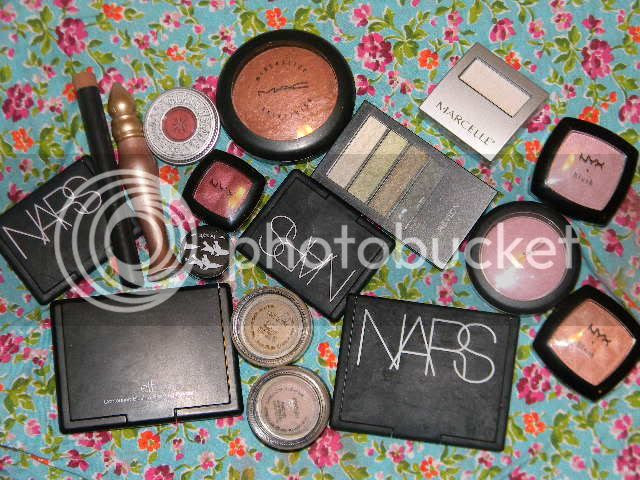 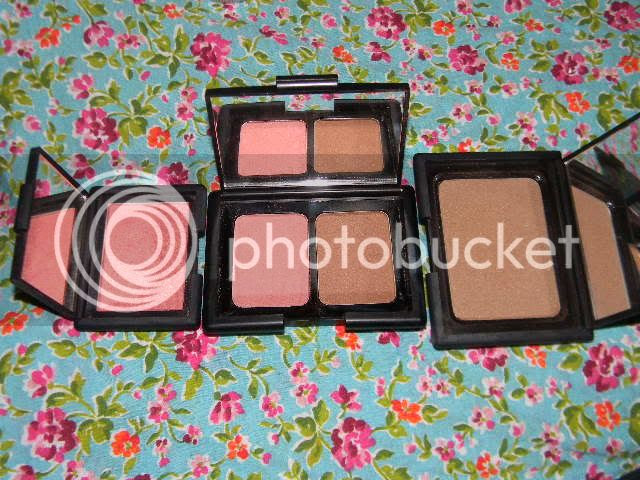 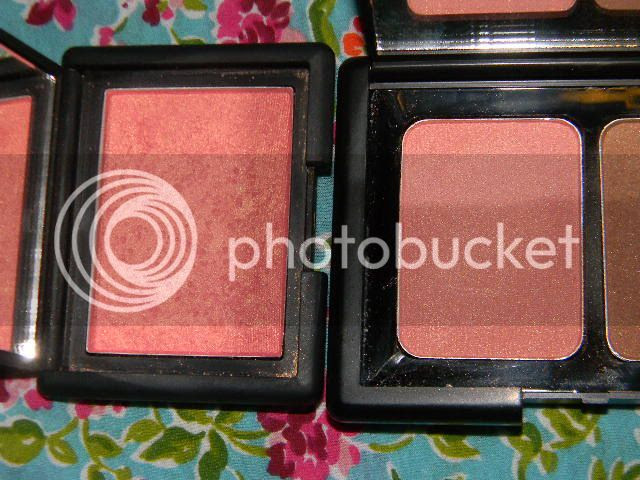 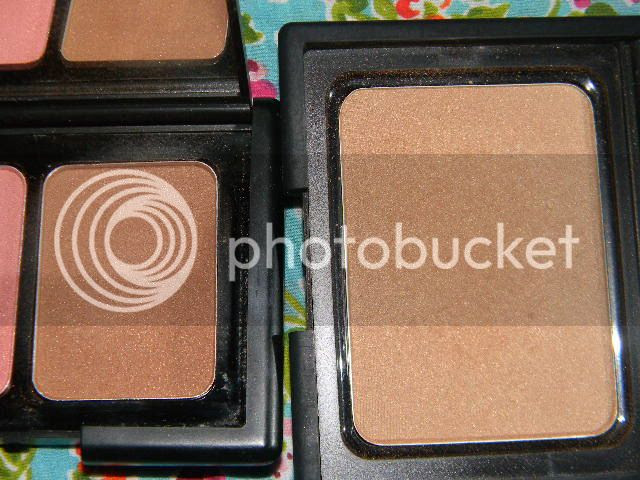 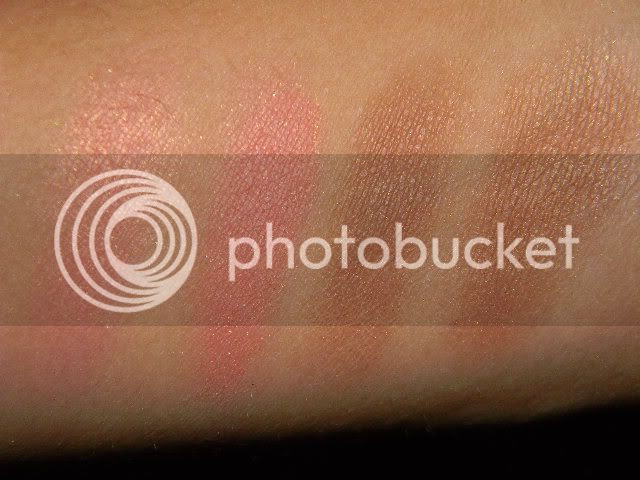 NARS Orgasm vs. ELF Blusher Side
I wouldn't say these two are very similar actually. Orgasm has a lot more gold in it, and the pink doesn't show up as much on the skin. The ELF one is more pink toned and less golden/shimmery.

NARS Laguna vs. ELF Bronzer Side
In the pan, Laguna looks lighter and more finely milled. However, when these two are swatched, they look virtually identical and have the same perfect golden sheen without looking over the top. 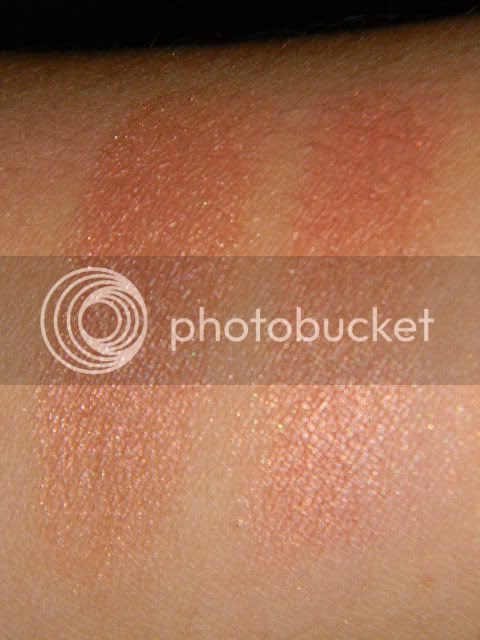 MAC So Ceylon MSF vs. NYX Terracotta
These two look kind of different in the pan, with Terracotta being lighter and more rosey. So Ceylon is more finely milled, but these two are very similar in color on the skin, but Terracotta is a tad bit more orange. But since So Ceylon is LE, you could simply get Terracotta! 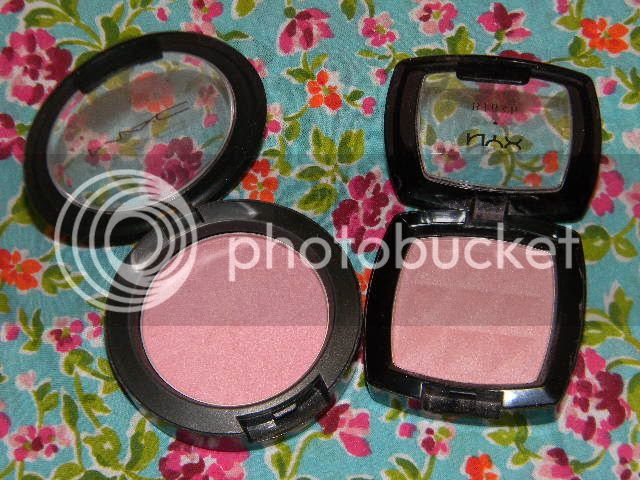 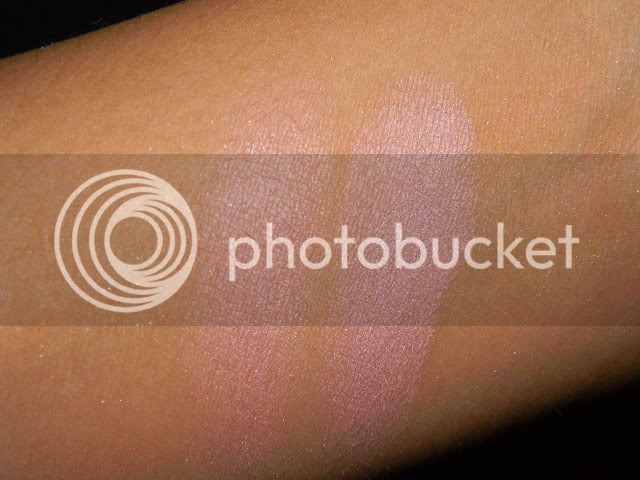 MAC Well Dressed vs. NYX Angel
These two look very very very similar in the pan! Both of them are a pale milky baby pink, and both being extremely wearable. However, I think Angel is a bit more cool toned and doesn't work as well for us warm girls. But I love them both! 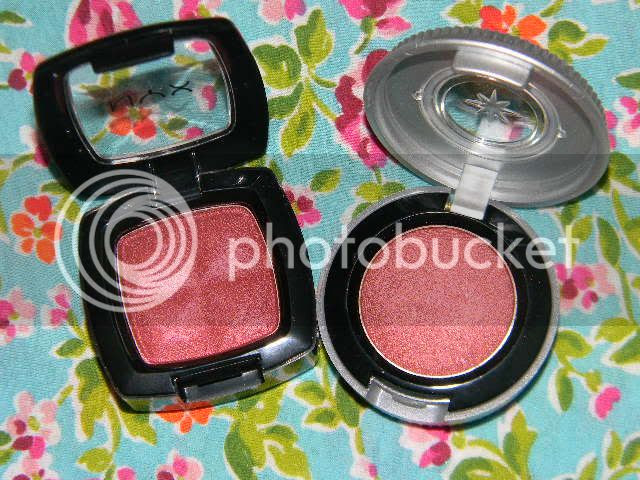 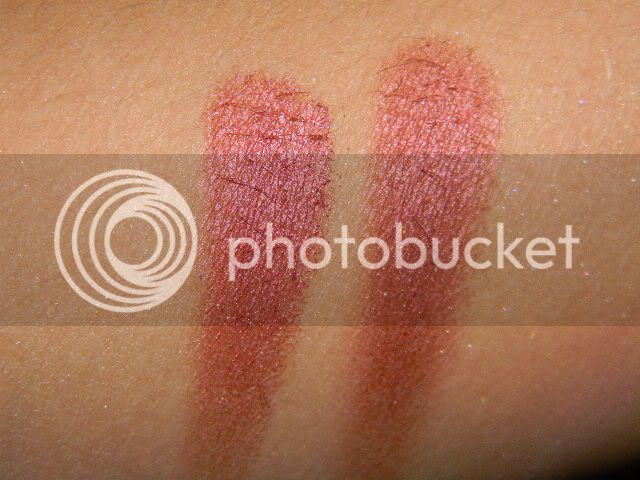 NYX Rust vs. Urban Decay Gash
Both of these two are gorgeously pigmented and a strong red based copper color. I think these two are pretty much identical other than the fact that Rust has a tiny bit of purple, making it more wearable. 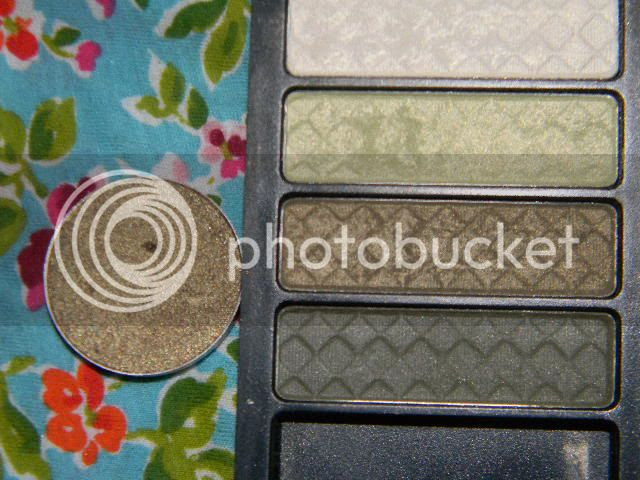 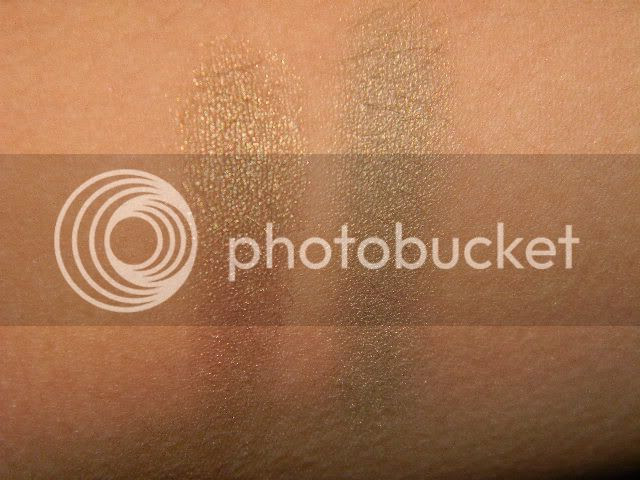 MAC Henna vs. Revlon Spring Moss
In the pan, these are IDENTICAL! For some reason, I really love Henna/Sumptuous Olive eyeshadows because they're both this.. gorgeous olivey green. I love the smoldering effect! However, these two are sadly nothing alike when watched. Henna is a lot more gold, and Spring Moss is more green. 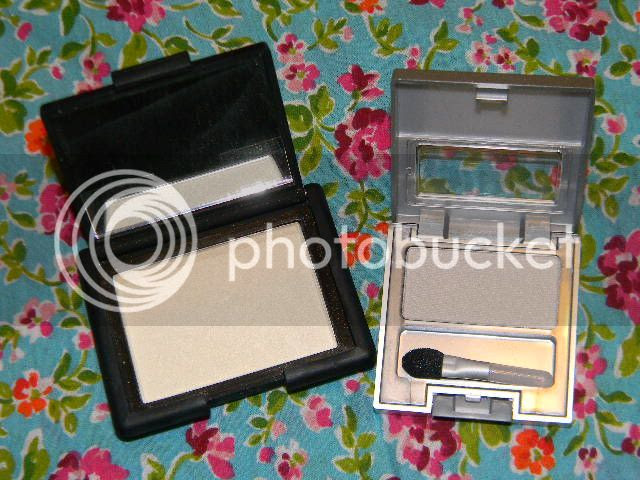 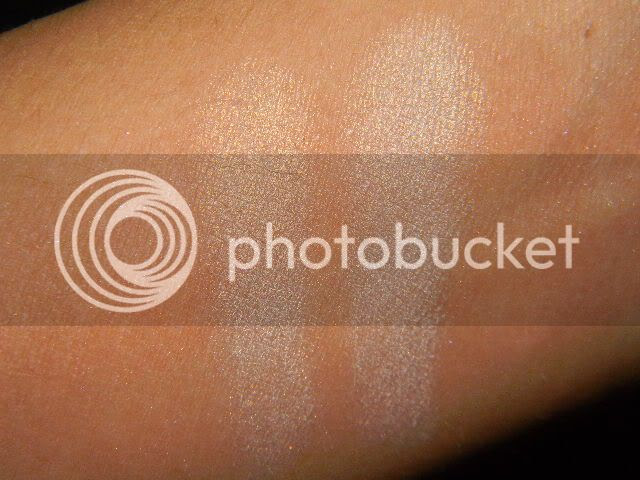 NARS Albatross vs. Marcelle in Polar
I actually got Polar BECAUSE I thought it looked like Albatross. They're both a white side with a golden sheen, while Albatross is more gold. Marcelle is less finely milled, but still REALLY pigmented! 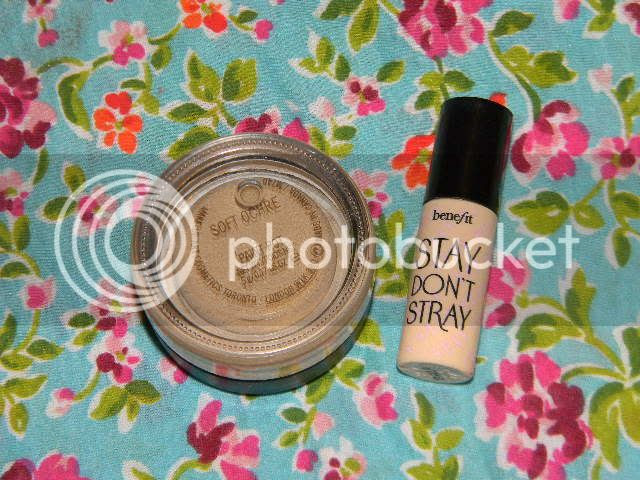 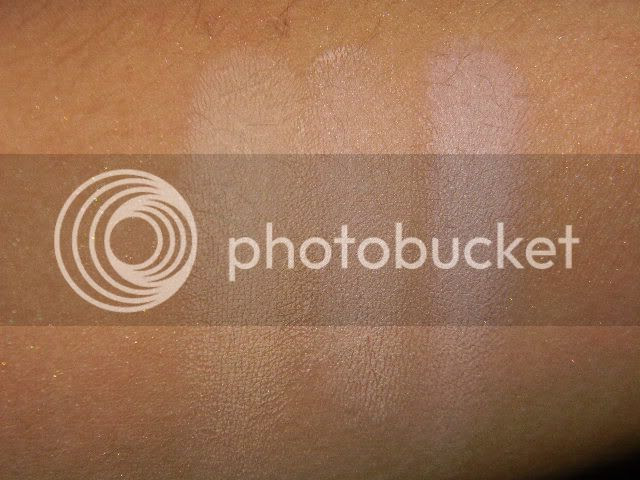 Soft Ochre vs. Stay Don't Stray vs. Painterly
I noticed how these three are all skintoned primers, and my favourite has got to be Painterly cause it's closer to my skin tone, and seems creamier to me. Soft Ochre is the most yellow toned, with Painterly being pink toned. Stay Don't Stray is in between! Good for you neutral girls!

Is it a Dupe? Nope, but theyre similar! 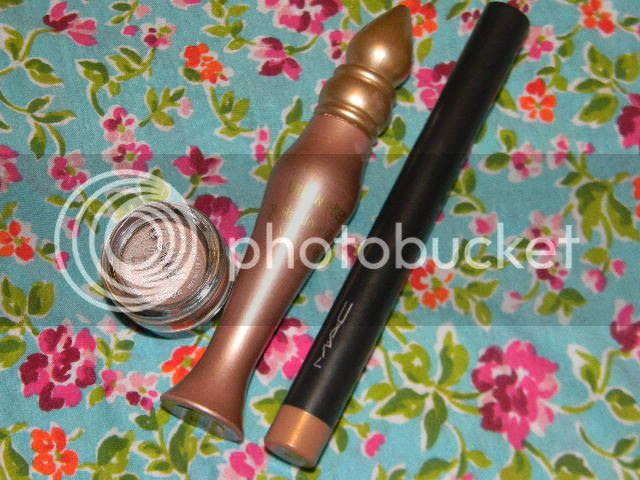 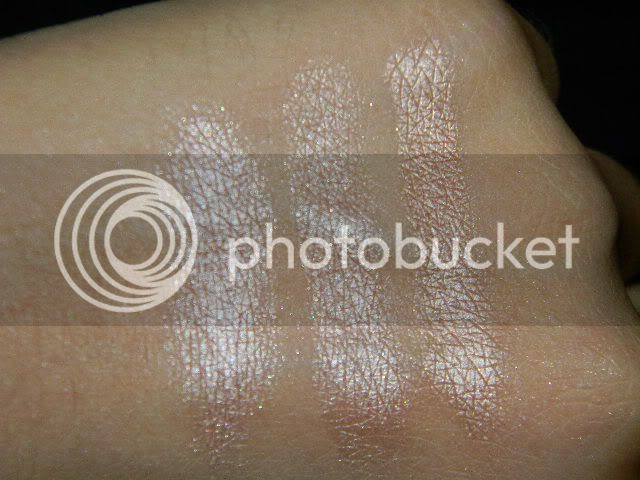 Benefit Creaseless Cream Shadow in RSVP vs UDPP in Sin vs. MAC Shimmersand Shadestick
These all looked very similar, and in my opinion, I think they're pretty much the same thing. Theyre all a champagne color with shimmer, while Shimmersand is the most pink toned of the group!

Woow.. extremely long post. Did I bore you? I'm sure I'll be doing more of these posts, because I love looking at dupe posts and they can really help save money!

All the products featured on this blog were purchased by me, unless otherwise stated. If a product was sent by a company, it will be stated within the post. All reviews are my very own personal opinion, and are not influenced by anybody or any company whatsoever. Please ask permission before taking any photos, as if I see my photo being used w/o permission, I will politely ask you to remove it. Thanks!

Erica
Hello! My name is Erica, and I'm from Toronto, Canada. I'm your average girl with a love for makeup and fashion, and I also believe in enhancing any person's beauty with cosmetics. Feel free to let me know your opinion on all things beauty <3

Apothica carries top brands such as Too Faced Cosmetics, Vincent Longo, YSL, Bobbi Brown, and Stila! Be sure to check them out :)
If you've got any questions, or business inquiries, my email is ericateresacho@hotmail.com :)